The Museum recently welcomed the following new board members: Daniel Canzoniero of Easton, Craig L. Fuller of Easton, Jeffrey Huvelle of Royal Oak and Washington, DC, and Nanny Trippe of Easton to its Board of Trustees. In addition, outgoing board chair Carolyn Williams of Easton (2010–17) and board member Nancy Appleby (2011–17) of Bozman were honored for their contributions to the Museum’s Board.

Director Ben Simons comments, “Carolyn dedicated her heart and soul to the Museum, and steered it with wisdom, courage, and fortitude through a time of transition and revitalization. She has become a friend and an inspiration to me, as she has to so many. We also salute and thank outgoing Secretary Nancy Appleby, who formed a key part of the leadership during the same period. Carolyn and Nancy will be dearly missed, but of course remain beloved members of the Museum family.”

Cathy McCoy was elected Chair of the Museum’s Board of Trustees, replacing Williams. McCoy, a retired corporate and securities lawyer, enjoyed an over 25-year legal career in the corporate and securities law field, the first half on the staff of the U.S. Securities and Exchange Commission and the latter half as a partner in the law firm Arnold & Porter. She has been active in a number of local nonprofits, including serving as board president of the Oxford Community Center, before becoming a trustee of the Academy Art Museum in 2015.

Simons adds, “We welcome Cathy as Chair of the Board of Trustees. As we look ahead to an exciting year celebrating the Museum’s 60th Anniversary, the leadership and future of the Museum could hardly be more secure. I’m also delighted to welcome our new board members. Each brings deep experience and passion for the Museum’s mission and commitment to helping us reach our goals in the coming years.”

New board member Daniel Canzoniero of Easton is Chief Executive Officer of Gamse Lithographing Company, Inc., which produces labels and flexible packaging for food, beverage and other consumer products companies. He serves as a director of the World Trade Center Institute in Baltimore and the Avalon Foundation in Easton, as well as President of The Graphic Source, a buying co-operative of 44 member companies. He is a member of M&T Bank’s Directors’ Council, and active in the Washington, Baltimore and Palm Beach Chapters of Young Presidents Organization (YPO).

Craig L. Fuller of Easton is Chairman of The Fuller Company, a strategic consulting group he organized in 1989. Most recently, he served as the president and CEO of the Aircraft Owners and Pilots Association. Previously, Fuller served eight years in the White House, first as Assistant to President Reagan for Cabinet Affairs before becoming Chief of Staff to Vice President George H.W. Bush during the second term of the Reagan Administration.  Serving on boards and as an advisor to aviation companies, Fuller has been active in aviation policy matters including serving on the FAA’s Management Advisory Council. Craig served for 10 years as a Trustee of the Kennedy Center for the Performing Arts and currently serves as a director of the U.S. Chamber of Commerce.

Jeffrey Huvelle of Royal Oak and Washington, DC, is Senior Counsel with Covington & Burling LLP in Washington, DC. He is leading expert in Labor and Employment Law and has received outstanding achievement awards by the Washington Lawyers Committee for Civil Rights and the Women’s Legal Defense Fund. He received his Juris Doctorate from Columbia Law School and his Bachelor’s Degree from Harvard College. He has served on the Massachusetts Commission Against Discrimination and in the Peace Corps in Kenya. His civic activities have included being a Board Member, Assistant Commissioner and Coach for Stoddert Soccer in Washington, DC.

Nanny Trippe of Easton is a many-generation native of the Eastern Shore and owner of Trippe-Hilderbrandt Gallery in Easton, which exhibits the work of many ﬁne award-winning artists in all mediums, as well as her own ﬁne art photography. She completed a Bachelor of Arts degree in Art History from Washington College. She has received numerous awards for her photography, including the 2009 Plein Air Easton Award Best in Show, the Best Black and White-Aubrey Bodine Award, 2nd Place 2012 Plein Air Easton Photography Competition, 2015 Photographers Forum: Finalist and published in “Best of Photography 2015.” The Academy Art Museum held solo exhibition of her works in 2016–17: Trees: Majesty and Mystery. 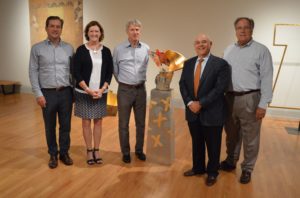 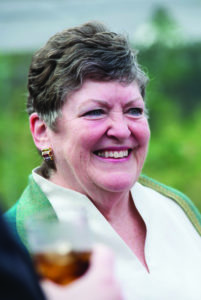 #1: Pictured left to right are Ben Simons, Director of the Academy Art Museum with new members of the Museum’s Board of Trustees Nanny Trippe of Easton; Jeffrey Huvelle of Royal Oak and Washington, DC; Daniel Canzoniero of Easton; and Craig L. Fuller of Easton.

#2: Pictured is Catherine McCoy, new Chair of the Museum Board of Trustees.