The Caprichos: Goya and Lombardo Continues Through February 25

The Academy Art Museum’s exhibition, The Caprichos: Goya and Lombardo, will be on display through February 25, 2018. The Caprichos by Emily Lombardo is a series of etchings which are in direct conversation and homage to Francisco Goya’s Los Caprichos, 1799. Both explore and present a satirical critique of contemporary culture and the forces that influence society along economic, racial, political, religious, and gender lines.

Emily Lombardo states, “Copying has been the defining component of the apprentice-mentor structure since the birth of art production. The relationship was successfully completed when originality became discernible in the hand of the apprentice. My earliest apprenticeship was with a newspaper, pen, and paper. I would tirelessly copy political cartoons depicting Nixon, Reagan, Castro, and countless others, with slight understanding of the historical significance and intent of the author. This method evolved into a personal narrative, born in reaction to a lack of resonance with mainstream conversations.”

Emily Lombardo is an artist who has lived and worked in Boston for over 15 years.  She received her BFA from The Massachusetts College of Art and Design and her MFA from the School of the Museum of Fine Arts, Boston. Her work has been shown and collected internationally. Lombardo applies her knowledge of sculpture and print across a wide range of conceptual projects. She engages with appropriative art practices as a mode of investigating personal and cultural identity. She resides in Brooklyn, NY.

The Academy Art Museum recently acquired Lombardo’s The Caprichos series for the Permanent Collection. The edition was published by Childs Gallery and printed at The Center for Contemporary Printmaking (Norwalk, CT) by printer Paul DeRuvo. The Art Gallery of Ontario loaned the entire set of Goya’s Caprichos so that we can exhibit the two series of prints in parallel. A publication will accompany the exhibition. The exhibition is supported by the Childs Gallery, Boston.

The Museum’s exhibitions are generously supported by the Maryland State Arts Council, the Talbot County Arts Council and the Star-Democrat. For additional information, visit academyartmuseum.org or call the Museum at 410-822-2787. 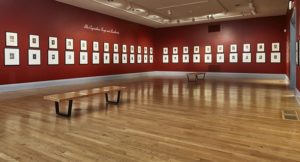 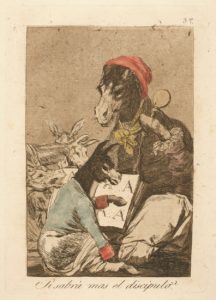 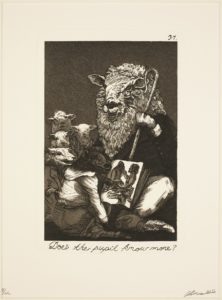 #1: Pictured is the Academy Art Museum’s exhibition, The Caprichos: Goya and Lombardo, which will be on display through February 25, 2018 in Easton, MD. (Photo by Sean McCormick)