The Academy Museum of Art is pleased to announce that Aaron Taylor Kuffner has been named the Visionary Artist for the 2019 Academy Art Museum Craft Show to be held October 11 – 13, 2019.

Aaron Taylor Kuffner is an American born conceptual artist, based in New York. Kuffner’s dynamic work reaches far outside conventional forms of representation. His pieces often take the form of multi-year projects that require in-depth research, collaboration with field experts and the development of new specialized skill sets. Each project provides unique conceptual tools that further the evolution of consciousness through the experience of beauty and the sublime.

Museum Director Ben Simons states, “The Academy Art Museum is pleased to have Kuffner’s Gamelatron exhibited at the Museum in September. His remarkable work involves sculpture and sound that actively engage his audience with an intent for his art to serve society.”

Museum Craft Show Chairman Craig Fuller adds, “Aaron Taylor Kuffner perfectly represents this year’s Craft Show theme, ‘Celebrating the Makers.’ The design and creativity that are Kuffner’s hallmark will delight all of those who see his work; and, Kuffner’s Artist Talk on Sunday, October 6 at 2 p.m. provides an excellent opportunity to meet this extraordinary artist/maker as we head into the week of the Craft Show, October 11 to 13.” Visionary Artist Aaron Taylor Kuffner will present his Artist’s Talk as part of the Kittredge-Wilson Lecture Series.

Presently based in Brooklyn, Kuffner crafts sonic kinetic sculptures and stages site-specific installations around the world as the principal artist behind the Gamelatron project, which marries Indonesian ritual and sonic tradition with robotics and modernist sculpture.  The project was conceived from years of study at the Institut Seni Indonesia di Yogyakarta and field research in Bali and Java followed by an artist in residency with the League of Electronic Musical Urban Robots headed by Eric Singer, one of the foremost experts in robotizing musical instruments. Since 1997 Kuffner is also known by the moniker Zemi17 as a recording artist on The Bunker techno label, an electronic musician heavily tied to the use of field recordings, insect calls and found sounds presented on custom built immersive surround sound systems, and as a DJ where he was the resident for The Danger (Brooklyn warehouse events in the 2000s). From 2008 – 2014, he was a member of the ambient experimental electronic music trio Zero Gravity Thinkers. For further information about Aaron Kuffner, visit http://aarontaylorkuffner.com/history/.

The Museum is located at 106 South Street is one of Easton’s historic landmarks – deeply tied to the educational community in Easton since 1800. Its permanent collection includes important paintings by Gene Davis and Anne Truitt among others and is especially strong on works paper by modern American and European masters. The Museum holds drawings, photographs, and prints by artists such as Pierre Bonnard, Robert Rauschenberg, James Turrell, and Martin Puryear. Welcoming over 50,000 visitors and participants annually to experience national and regional exhibitions, the Museum also offers concerts, lectures, educational programs, and visual and performing arts classes for adults and children. 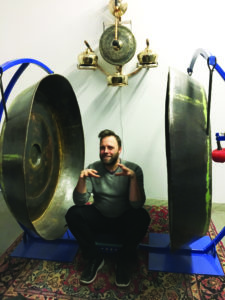 Caption: Pictured is Aaron Taylor Kuffner who has been named the Visionary Artist for the 2019 Academy Art Museum Craft Show. Kuffner crafts sonic kinetic sculptures and stages site-specific installations around the world as the principal artist behind the Gamelatron project, which marries Indonesian ritual and sonic tradition with robotics and modernist sculpture.