Artists Donna Dodson and Andy Moerlein (aka the Myth Makers) have built one of their iconic sapling sculptures on the grounds of the Academy Art Museum in Easton, MD. The  25-foot high bird sculpture, made from natural materials with the help of volunteers, is literally based on the Hooded Merganser, a bird which is common in Maryland. Figuratively, however, the artists’ intent is to create a bird sculpture which represents a proud monument to independent thinking and bravery, referencing Eastern Shore native Frederick Douglass.

Donna Dodson comments, “According to a Native American myth, the Merganser is often the last bird to migrate – representing courage and determination – which is relative to the message about Frederick Douglass’s life.”

According to Dodson, the couple chose to name themselves the Myth Makers because they felt that society has lost touch with storytelling. She adds, “We relish the idea that our world is full of a lot of opinions and ideas that we can have fun with. Connecting mythological stories to our artwork allows us to share these ideas, sometimes in a fanciful way, with our audiences.”

Although monumental in scale, the ephemeral works of the Myth Makers are temporary in nature. Made from natural materials, often collected by volunteers, they are site specific, and respond to their local audience. Meaning to only last up to a year, the sculptures appear, fade, and disappear, adding a chapter to the life stories in their communities. The Mighty Merganser bird sculpture on the Academy Art Museum grounds was constructed by the artists in a week from saplings collected on the Eastern Shore. Andy Moerlein comments, “Pieces like the Merganser will go through several iterations throughout their life span as the seasons change and the wood dries.”

Based in Boston, the Myth Makers have worked in Peru, Switzerland, Canada and China and have shown their monumental sculptures, the “Avian Avatars,” on Broadway in New York, NY; Muskegon, MI; New Orleans, and in many museums in New England.

It is the Museum’s goal to engage the wider community from multiple counties in this exhibition. The Museum’s program includes links to Maryland flora, history, visual arts, and language arts. On January 16 and February 4, from 10 a.m. to 12 p.m., the Museum will host Creative Writing Poetry Workshops for Adults with instructor Sue Ellen Thompson. In addition, on Saturday, January 28 from 10 a.m. to 1 p.m., the Museum will sponsor a free family workshop “Make Your Own Hero Bird.” The exhibition is sponsored by the Maryland State Arts Council, Talbot County Arts Council, the Star-Democrat, Katherine and David Allen, Maurits Van Wagenberg, Willow Construction and Atlantic Security.

In addition to “The Myth Makers in Maryland: The Mighty Merganser,” the artists will have an exhibition “Avian Inspirations: Donna Dodson and Andy Moerlein (the Myth Makers)” at the Museum through February 26, 2017. The collaboration between Andy Moerlein and Donna Dodson is born from a mutual love of the wild. Donna Dodson, an American sculptor who has been honored with solo shows nationwide for her artwork, takes inspiration from the mysterious nature of animals that spark her imagination.  Her goddess sculptures have been exhibited internationally in sculpture parks and art museums. In 2012, 2013 and 2014, she was featured at the Fountain Art Fair NYC in the historic 69th Regiment Armory Building. In 2013, she returned to Europe, to exhibit her artwork in the Netherlands and to complete a private commission for a Swiss collector. In 2011, Dodson and her partner Andy Moerlein participated in the Verbier 3D Foundation’s Artist Residency and Sculpture Park in the Swiss Alps. In 2014, they also participated together in residencies in Cusco, Peru, at the Escuela de Bellas Artes.

Andy Moerlein, an internationally-exhibited sculptor, takes inspiration from events in the natural world that leave visual marks which strike a narrative chord in the artist. He has an extensive resume of public art works and site specific monumental outdoor sculptures. His installation work has been featured indoors at the Johnson Museum, Ithaca, NY, the Hood Museum, Hanover, NH, the Currier Museum, Manchester, NH, and the Everson Museum, Syracuse, NY. In 2012, he was the Artist in Residence at the Fruitlands Museum in Harvard, MA. His new installation, “Impossible,” is in Muskegon, MI.

Curator-led tours of “Avian Inspirations: Donna Dodson and Andy Moerlein (the Myth Makers)” will be held at the Museum on Thursday, December 8, 2016 at 12 p.m. and on Tuesday, January 24 at 12 p.m. The exhibition is sponsored by the Maryland State Arts Council, Talbot County Arts Council, and the Star-Democrat. 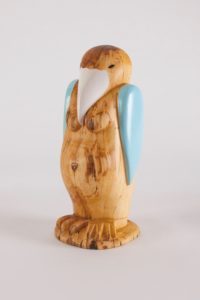