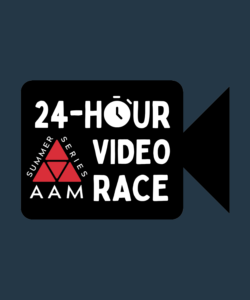 Make a short film for our 24-Hour Video Race! Presented in partnership with the Chesapeake Film Festival and organized by Francisco Salazar, filmmakers of all ages (either as a team or solo) will have the chance to create a one-to-seven-minute video that will be screened at the Academy Art Museum on Friday, July 29. Films must incorporate a word and theme that will be provided to competitors via email on Friday, July 22 at 5 pm. Budding and experienced filmmakers will have just 24 hours to shoot, edit, and submit a video by the deadline of Saturday, July 23 at 5 pm.

A panel of judges including Cid Collins Walker (Festival Director) and Martin Zell (Board of Trustees President) of the Chesapeake Film Festival will choose the Best in Show for two categories—Student/Family (at least 50% of the filmmaking team are under 18) and Adult—in addition to a People’s Choice Award. Best in Show winners will receive bragging rights, plus two (2) Festival Passes to see all films in the LIVE Chesapeake Film Festival for 2022 and a Waiver Fee Code to enter their film for consideration in the festival for 2023!

Timeline:
Now through July 22 – Sign-up to participate. REGISTER HERE
Friday, July 22, 5 pm – Film theme and word will be emailed to all teams
Saturday, July 23, 5pm – Film submission deadline
Friday, July 29 – All films will screen at AAM, winners will be announced

About the Chesapeake Film Festival

Founded in 2008, it is the mission of the Chesapeake Film Festival to entertain, empower, educate and inspire diverse audiences of all ages by presenting exceptional independent films and events. They offer outstanding filmmakers, experienced and emerging, a forum to showcase and discuss stories of compelling interest to a local and global community. Because of the location and diverse population of the Chesapeake Bay, the Festival prioritizes films that focus on the environment and social justice issues. The Festival also strives to be an economic engine for the Eastern Shore by enticing visitors to experience exceptional films, world-famous seafood, art, and the beauty of the Bay’s waterways. The 15th anniversary of the Chesapeake Film Festival will include a weekend of provocative, insightful, and innovative films at the Live Festival September 30 – October 2, followed by a week-long Virtual Festival October 3 through Sunday, October 9, 2022.

Francisco Salazar is an award-winning filmmaker whose first feature Nowhere, which he co-directed with his brother, was selected into more than 20 film festivals, including Outfest Fusion, the OutShine Film Festival, Cinequest Film Festival, and Woods Hole Film Festival, where it was the runner-up Jury Award winner and Second Runner Up for the Audience Award.