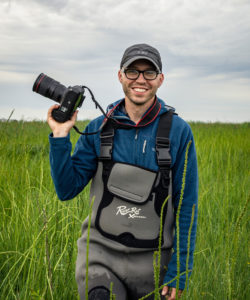 This event is currently at capacity

Photographer and filmmaker Michael O. Snyder discusses his Coming Coast series documenting the effects of climate change on the Chesapeake Bay and how visual storytelling can impact environmental issues. Snyder has been a featured speaker at the United Nations Climate Conference, a Portrait of Humanity Award Winner, a Climate Journalism Fellow at the Bertha Foundation, a Blue Earth Alliance Photographer, a Society of Environmental Journalists Member, and currently, a resident Artist at the McGuffey Art Center in Charlottesville, Virginia. His photojournalism work has been featured in National Geographic, The Guardian, The Washington Post, VOX, BBC, PBS News Hour, CNN, and NPR. An adventurer at heart, Snyder has hiked the Appalachian and John Muir Trails, cycled across Europe, and ridden trains through Siberia. Through his production company, Interdependent Pictures, he has directed films in the Arctic, Amazon, Himalayas, and East Africa.