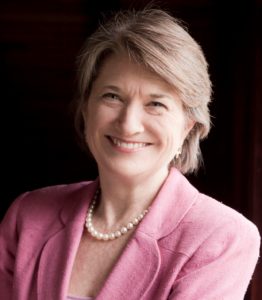 Leslie Greene Bowman is President of the Thomas Jefferson Foundation, which owns and operates the UNESCO World Heritage site, Monticello — the home of Thomas Jefferson.  She has spearheaded the Foundation’s vision to engage a global audience in a dialogue to Jefferson’s world and ideas.  She earned a her Bachelor of Philosophy in American history and art history at Miami University, and her Master of Arts in Early American Culture as a Winterthur Fellow at the University of Delaware.  She has spent her 35-year career in museums, and served at the highest levels – Director of the Winterthur Museum, Assistant Director of Exhibitions and head Curator of Decorative Arts at the Los Angeles County Museum of Art, accreditation commissioner for the American Alliance of Museums, and board member of the Association of Art Museum Directors. While in Los Angeles, she enjoyed academic appointments with both USC and UCLA, where she taught American decorative arts history.  She is the author of American Arts & Crafts:  Virtue in Design, and co-author of American Rococo, 1750-1775:  Elegance in Ornament, each amplifying scholarship on important eras in American art history.   She is a trustee emerita of the National Trust for Historic Preservation.  In 2014 President Obama appointed her to the Committee for the Preservation of the White House, on which she previously served under Presidents Clinton and Bush.