A More Abundant Life: WPA Artists from AAM’S Permanent Collection and Beyond 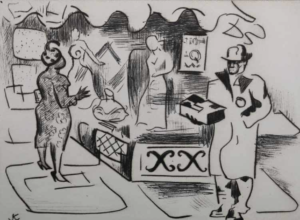 Following the Great Depression and as part of the government’s New Deal program, the Works Progress Administration (WPA) started the Federal Art Project, which provided artists with paid commissions and teaching assignments all over the country. From painting large-scale public murals to providing graphic design work, WPA jobs kept artists employed, and alongside other wide-ranging employment initiatives, helped the country steadily reconstruct “a more abundant life.” This more abundant life was a vision president Franklin D. Roosevelt described in speeches during the time, and the WPA solidified the role of the arts as important to American recovery. Many of the artists who 6 held WPA jobs were able to remain practicing artists and went on to define American modern and contemporary art in the mid-20th century.

The exhibition offers historic fine prints and photographs by WPA artists, including Robert Blackburn, Jacob Kainen, Russell Limbach, Georges Schreiber, Rufino Tamayo, Dox Thrash, and Charles White. It is on view concurrently with the retrospective of fellow WPA artist Werner Drewes, who taught at Brooklyn College as part of the program.