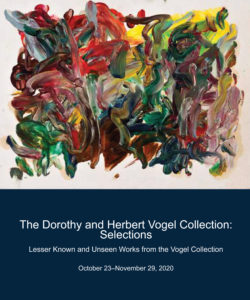 This exhibition presents highlights and previously-unexhibited works from the Vogel Collection, which was gifted to the Academy Art Museum in 2008 as part of Dorothy and Herbert Vogel’s 50 Works for 50 States initiative. Featuring works on paper and sculptures by prominent contemporary artists such as Richard Tuttle, André Cadere, Robert Barry, Steve Keister, Moshe Kupferman, Lucio Pozzi, Edda Renouf and others, the exhibition reveals both the landscape of 20th century American art and the story of an exceptional collection.

The selection presents some of the most illustrious examples of abstract and minimalist art in America that addresses the profound socioeconomic and creative transformations of the postwar period. From Tuttle’s whimsical but interpretative watercolors on ruled paper to Cadere’s color-coded sculpture with an elusive solution, yet can become a game of chance for both the installer and the viewer, the exhibition revisits simultaneously radical and subtle ideas that defined the future of artistic production.