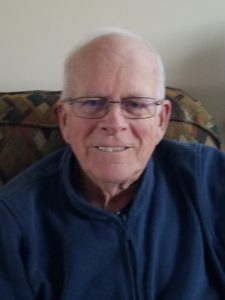 He continued on to get his master’s degree in Ceramics from William Paterson University in New Jersey  and began a 30 year journey as a high school art teacher.   Always a maker of vessels, he spent his years as a teacher inspiring others to refine their craft as he continued to work outside the classroom on his own creations.

Paul and his wife Irene are now retired with a home and studios in Maryland.  Paul continues to teach ceramic classes for adults at the Academy Art Museum in Easton. He has work at several locations and local galleries, including Adkins Arboretum and Gallery 37 in Milford, Delaware and further afield at Craftspeople in West Hurley, New York. 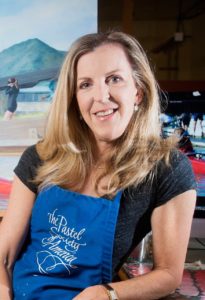 Barrie started formal art training at the age of nine in classical realism in Baltimore, MD. She is the great granddaughter of a prominent American Impressionist and was encouraged by her family and teachers to pursue art seriously. She got her first commission at age 12.

By age 20, she had worked her way up to the level of painting portraits, and began studying with top portrait painters. Barrie then spent 15 years painting children, mainly for families in the American Southeast. She was picked up by agents including Portraits South and Portraits, Inc. in New York.

In 1998, she switched to specializing in dogs for the next 15 years after she was offered a solo show of dog paintings in New York’s Upper East Side, then had two more solo shows in Palm Beach, Fl. and Carmel, Ca.  Focusing on dogs was fun, she says, and so was being flown all over the country to do them. It also led to a body of commercial work creating images for gift products.

Barrie became known as a top pastellist, and was invited to teach at the Pastel Society of America in New York. For a 2011 feature article on her, one of her agents said “her work in pastel is the best I’ve ever seen for a living artist. It is extraordinary.”

She now works in charcoal, pastel and oils, loves all three for different reasons. The choice of which to use depends on the nature of the subject and client preference. Barrie paints a variety of subjects: children, adults, dogs and horses, all of which are in private collections.

Katie was born in Washington DC and grew up in a large family in Bethesda. She graduated from the University of Maryland with a degree in art and worked in the field of graphic design before moving to Easton in 2001 to concentrate on her art. Prior to this she had worked for a high-end graphic design firm in marketing and production. An award-winning artist, she is well known for her comprehensive knowledge of the basics and techniques of many mediums, especially charcoal, oil and pastel and is a noted teacher of multiple art disciplines at the Academy Art Museum in Easton, Maryland. In 2010, she was hired to write and manage the adult art curriculum at the Museum, overseeing 16 instructors and many classes. She enjoys all subject matter, especially still life and figurative work. Her mediums include graphite, charcoal, pastel and oil. A recipient of many awards in art, Katie received a second place in the 2019 National Shades of Pastel Exhibition. 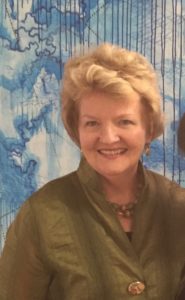 Ms. Cooley was born in Buffalo, NY,  where she completed her undergraduate degree in Art Education. After teaching secondary studio art and art history, she moved with her husband to South Africa and began fifteen years living in Asia (Bangkok) and South America (Caracas) returning twice more to South Africa. She taught on the secondary and college level and exhibited her in each country. Returning to the US, she completed a M. Litt. with concentration in Art History while teaching AP Studio Art and AP Art History in New Jersey.

She studied under various printmakers, including at the Johannesburg Art Foundation (etching program initiated by Willliam Kentridge) and at Santa Reparata School of Art in Florence, Italy. She has participated in many printmaking workshops and has been influenced by mentors Ron Pokrasso and Dan Welden, with whom she studied in Florence, Santa Fe and Charleston. She studied painting under Giovanni Casadei, Paul duSold and Christine la Fuente of the Philadelphia Academy of Fine Arts. Most recently, she studied under printmaker, Catherine Kernan.

Having spent 2005-2009 living part time in Shanghai, China, she has had the opportunity to meet many printmakers through her friend Professor Xu Longbao, chairman of Printmaking at University of Shanghai. Through him she met and studied with Ink Painting Master, Wang Jie Yin. This method of painting, so different from the west, employs soft, unsized papers and brushes of organic material. Based on capillary action, the method melds appropriately with the artist’s love of water. The Shanghai experience echoed her inspiration of studying under Prof. James Kuo, from Suzhou, China in her undergraduate days.

Rosemary curated the exhibition “American Impressions: Contemporary Printmaking”, in Shanghai in April 2012 at the Shanghai International Convention Center, which represented 73 prints by 36 American printmakers. She also facilitated an exchange exhibition, “Shanghai Impressions: Comtemporary Ex Libris Prints” at Washington Printmakers Gallery in June 2012, which featured the works of 36 printmakers from Shanghai.

Rosemary is past President and Board Member of Washington Printmakers Gallery, and her work is in the collections of the Academy Art Museum, Easton, MD, Georgetown University, Delbarton School, Morristown, NJ, the Corcoran Gallery of Art, the Martha Jefferson Hospital, Charlottesville, VA , the Natonal Headquarters of Jesuit Colleges and Universities, the Library of Congress and in private collections in the United States, South Africa, Belgium, Sweden,Venezuela, France, England, Italy, New Zealand, Japan and China.

Bernard Dellario earned a bachelor’s degree from Kings College in Wilkes-Barre, PA with emphasis on finance and art history.  He studied Art at the Art League School in Alexandria, Virginia and attended 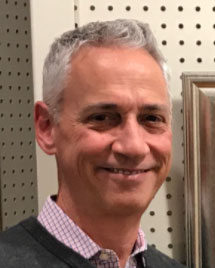 several workshops with nationally known artists.  He has been a member of the Washington Society of Landscape Painters since 2003. Fondly known as WSLP, one of the oldest active artist organizations in the Washington area, Bernard currently serves as President. He teaches painting classes through several venues, has won national awards and exhibits throughout the Maryland Eastern Shore and Washington, DC region.

University of Maryland-The Bay and Beyond 2010

Sahm Doherty-Sefton was the 2018 winner of the David Grafton prize at the Academy Art Museum for her color photograph ‘At Last’, which is currently on exhibit at the museum.

Sahm was the first woman photographer on the masthead of Time magazine, where she remained for more than 25 years. She lived and worked in both New York and Washington D.C., covering a wide diversity of subjects – sports, fashion, politics, the arts, and social unrest. She became Time’s White House photographer during the Carter Administration. But a wanderlust took hold and Time cooperated, basing her successively in Johannesburg, Cairo, Bonn, and London, from where she chronicled major international events. Her assignments have included coverage of wars in Cyprus, Zimbabwe and Beirut and major world events.

She has photographed numerous world leaders, including Margaret Thatcher, Anwar Sadat, Yasser Arafat and Leonid Brezhnev. Besides Jimmy Carter, she has had before her cameras American presidents Johnson, Nixon, Ford, Reagan and George H.W. Bush.

In London she was the European picture editor of Time for six years. After her return to America, she produced and filmed television documentaries.

Rediscovering with her camera the geographical and cultural vastness of America has been a creative journey as exhilarating as the years overseas for Ms. Doherty-Sefton. She currently resides in St. Michaels, Maryland, where, in addition to continuing as a working photographer, she conducts photography classes at the Easton Academy Art Museum and for Chesapeake College.  Her work has been exhibited widely, most recently in Poland, Israel and the Biggs Museum of American Art. 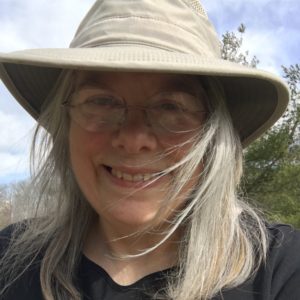 Diane DuBois Mullaly is an award-winning oil painter. She attended Tyler School of Art of Temple University, and since then has continued to study diligently with regional and nationally recognized painters. Mullaly’s subjects are wide ranging, and include landscape, still life, animals and figurative. A devoted plein air painter, she is on the steering committee of the Plein Air Painters of the Chesapeake Bay, has been juried into Plein Air Easton eight times, and was a featured artist in the February/March 2018 Plein Air Magazine. Mullaly exhibits and sells her work at A Happy Place Gallery, Easton, MD, The Treasure Chest, Oxford, MD, and Les Poissons Gallery, Chestertown, MD. She has been twice juried into 25 Days of Minis, a festive online event. A certified Maryland Master Naturalist, Mullaly leads the Nature Sketchers monthly walk at Adkins Arborteum (virtually during the pandemic). As an instructor at the Academy Art Museum; she shares her love of painting, paired with all the technical knowledge she has acquired through her years of study. Mullaly lives in Talbot County, Maryland, near the Choptank River, with her husband and two quirky cats. 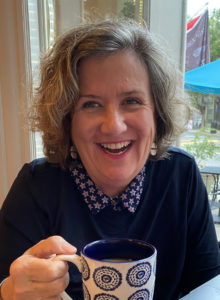 Maire McArdle, the founding design director of Bethesda Magazine and Arlington Magazine, has launched, redesigned or art directed over 250 publications throughout her career. She has been an adjunct professor at the Corcoran College of Art+Design in Washington, D.C. and an invited guest speaker for arts organizations throughout the D.C. metro area. A book designer and children’s book writer, McArdle has also designed and custom-published two prominent local artists’ books and continues to exhibit her mixed media monotypes. Her class, “Photo Shoot Adventures,” which is co-taught with her husband, Stephen Walker, encourages creative spontaneity while learning how to look at the world with a compositional eye. To see her work: www.squarehousestudio.com 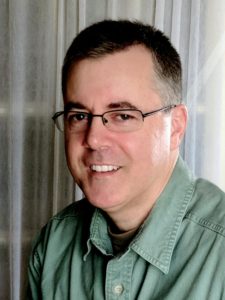 Brad studied Visual Communications/Illustration at Montgomery College, in Rockville Maryland, and then at Maryland Institute College of Art (MICA) in Baltimore Maryland, where he graduated with a BFA in 1991.   Between 1994 and 1995 he took evening and summer classes at the Schuler School of Fine Art in Baltimore. Over the years he has gained priceless drawing and painting knowledge, learning from nationally and internationally known artists like Carolyn Anderson, Tim Bell, George Strickland,  Abigail McBride and Teresa Oaxaca, as well as through three decades of independent study and research. He is an award winning Plein Air painter and popular drawing and painting instructor. 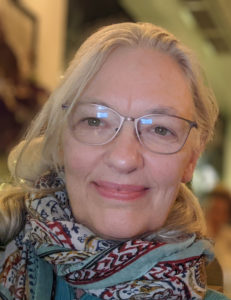 Sheryl Southwick is an award-winning artist known for her collages and paintings.  She is a teaching artist at the Academy Art Museum and for Chesapeake Multicultural Resource Center.  For a full bio see 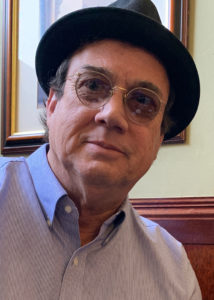 Stephen Walker is a national award-winning artist who has exhibited his oil paintings, pastels, serigraphs, and human figure bronze sculptures for over 35 years. With a Masters degree in sculpture from the University of Memphis, this classically-trained artist was a career educator in Montgomery County, Maryland on both high school and college levels in art and photography. Walker is an active member of the Working Artists Forum, St. Michaels Art League and the American Society of Marine Artists. His “Intro to Sculpture” class is a new opportunity at the Academy Art Museum and “Photo Shoot Adventures” is a recurring class which he co-teaches with his art director wife Maire McArdle.

To see his work, www.squarehousestudio.com 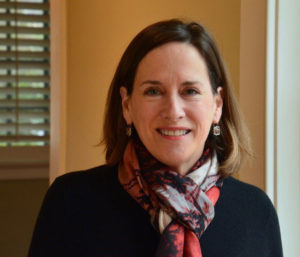 “My goal as an artist is to translate a scene, emphasizing what interests me most about a specific place at a moment in time. I want you to see the world through my eyes.”

Known for landscapes drenched in light and color, Meg has won awards at major juried exhibits and plein air competitions. Though realistic in nature, her work has a strong abstract element, characterized by simplified shapes, limited values, and glowing color. Her paintings have been purchased by the Academy Art Museum in Easton, MD, the town of Oxford, MD, the National Institutes of Health, Georgetown University Hospital, and numerous private collectors.

Meg is an elected member of the Washington Society of Landscape Painters and the Salmagundi Club in New York City. Her landscapes are featured in the book 100 Plein Air Painters of the Mid-Atlantic. She teaches at the Academy Art Museum in Easton.